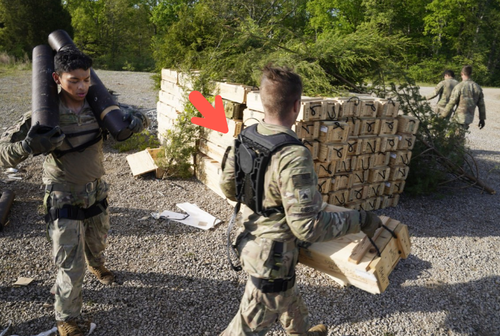 The US Army is about to receive a lightweight, unpowered exoskeleton suit called the Soldier Assistive Bionic Exosuit for Resupply (SABER), which can increase the strength and endurance of soldiers, DEVCOM Army Public Affairs Office said in a press release.

SABER weighs just three pounds and is a harness that soldiers strap around their shoulders and legs. All a soldier has to do to activate the suit is press a button on the left shoulder. When activated, the exoskeleton suit reduces stress on soldiers’ backs by more than 100 pounds while lifting all sorts of heavy items, such as ammo boxes, artillery rounds, and .50 caliber machine guns. Testing showed that most soldiers had a 60% increase in endurance while wearing the suit.

Researchers at Vanderbilt designed SABER and worked with soldiers in the 101st Airborne Division to test exoskeleton suits in heavy-lifting field scenarios. The exosuit addresses the need to reduce injury and fatigue, which are critical to combat readiness.

“We spent the first few months focused on interviewing, observing, and spending time with Soldiers.

SABER received high marks after 90% of soldiers who wore the suits after operational field testing in May said they would perform their duties much better.

Production of the suits will start in late 2022 by HeroWear, a Nashville-based industrial exosuit manufacturer. The goal is for hundreds of soldiers to be utilizing the suits in 2023.

#FunFactFriday – The Royal Navy has been testing Jet Suit assault teams to determine if the Iron Man-like suits could be used to rapidly swarm and board ships. U.S. Special Operations Command is also evaluating a jetpack that can reach speeds of more than 200 mph. pic.twitter.com/mo5FoGWkDu

Kass: Who Feels Safe In Chicago?