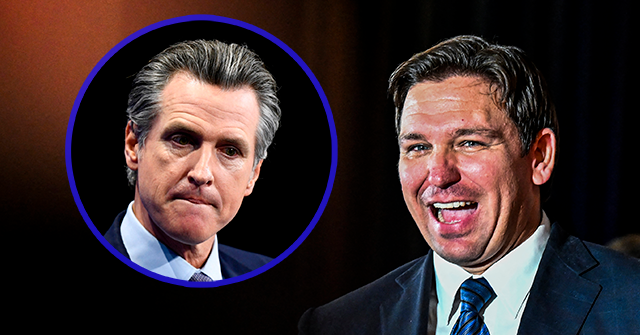 DeSantis took credit for the roughly 50 migrants who arrived in Martha’s Vineyard, a vacation island where former President Barack Obama owns a $15 million home, on Wednesday.

Martha’s Vineyard officials begged for federal assistance for what they call a “humanitarian crisis” on Thursday.

Gov. Newsom on Thursday said what DeSantis and Abbott are doing is “cruel,” and formally requested the DOJ investigate DeSantis for kidnapping or potential Racketeer Influenced and Corrupt Organization (RICO) charges.

What @GovRonDeSantis and @GregAbbott_TX are doing isn’t clever, it’s cruel.

I’m formally requesting the DOJ begin an immediate investigation into these inhumane efforts to use kids as political pawns. pic.twitter.com/x2sBa06nSw

“Like millions of Americans, I have been horrified at the images of migrants being shipped on buses and planes across the country to be used as political props,” Newsom wrote. “Clearly, transporting families, including children, across state lines under false pretenses is morally reprehensible, but it may also be illegal.”

Newsom claimed the feds would have jurisdiction over this issue due to interstate travel. Newsom said:

Several of the individuals who were transported to Martha’s Vineyard have alleged that a recruiter induced them to accept the offer of travel based on false representations that they would be transported to Boston and would receive expedited access to work authorization. The interstate travel at issue provides a basis for federal jurisdiction over this matter.

Accordingly, I strongly urge the U.S. Department of Justice (US DOJ) to open an investigation into possible criminal or civil violations of federal law based on this alleged fraudulent scheme. In particular, I urge US DOJ to investigate whether the alleged fraudulent inducement would support charges of kidnapping under relevant state laws, which could serve as a predicate offense for charges under the Racketeer Influenced and Corrupt Organization (RICO) provisions of the Organized Crime Control Act of 1970.

Newsom also claimed Desantis’s intent was to “humiliate and dehumanize” the migrants and requested the DOJ look into a possible “civil rights conspiracy in violation of 42 U.S.C. section 1985.”

“Finally, although I believe US DOJ’s investigation should include these possible avenues, there may be others US DOJ can and should pursue,” Newsom concluded. “I look forward to continuing to work with the Administration on protecting human rights.”

DeSantis’s Democrat opponent, Charlie Crist, also said he would support the DOJ getting involved in this case.

“That sounds appropriate to me,” Crist said when asked whether the DOJ should get involved. “Justice needs to be served here.”

DeSantis pushed back against his critics on Thursday, saying, “Our message to them is that we are not a sanctuary state.”

Newsom’s letter to the DOJ is the latest step in a brewing feud between the California governor and DeSantis. Newsom called DeSantis a “bully” in July and launched attack ads against Florida’s conservative leaders, claiming California is a freer state.

After months of critiques, DeSantis recently responded to Newsom and mocked his leadership, noting that Newsom and other Democrat officials in California “can’t even keep the power on.”

“They’re so worried about Florida. They can’t even keep the power on in California. I mean, are you kidding me?” DeSantis said.

“No Virus Theory” Psyop Being Run from Substack is Uncovered