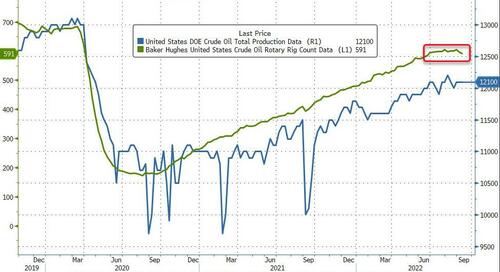 The threat of power rationing across Europe persists even after EU officials held an emergency meeting last week to starve off the impending winter energy crisis. EU countries have increasingly relied on US energy imports, though shale bosses warned the ability to boost oil and gas supplies would be challenging.

“It’s not like the US can pump a bunch more. Our production is what it is,” Wil VanLoh, head of private equity group Quantum Energy Partners, one of the shale’s most prominent investors, told Financial Times.

“Not on the oil side, not on the gas side.

Europe can thank the Democrats and the Biden administration for their war against crushing the US energy industry that led to massive divestments across the sector, which crippled oil production growth and refining capacity, and pressured/shamed the world into withdrawing any capital allocations to fossil fuels.

Ben Dell, chief executive of private equity group Kimmeridge Energy, said the shale industry’s investors on Wall Street would not give their blessing to a big production increase, preferring a low-production, high-profit model.

“The capital availability is extremely limited.”

On top of the Democrat-led crippling of the US energy industry, EU leaders have been on an ESG-crazed mission to decarbonize their power grids with renewable (now finding out — not so reliable) energy and are frantically bringing back crude oil, coal, and natural gas power generators ahead of the cold season. Some EU countries are even extending the life of nuclear power plants.

The problems don’t end there — in 80 days, or on Dec. 5, the EU will embark on another suicide mission of banning seaborne imports of Russian crude. Then on Feb. 5, 2023, a ban on Russian petroleum product imports kicks in. These sanctions were enacted over the summer. However, piped imports of Russian crude and petroleum products will be exempt in some EU member countries, like Hungary, Slovakia, and the Czech Republic.

“We’re not adding [drilling] rigs and I don’t see anyone else adding rigs,” said Sheffield, who runs one of the biggest oil producers in the US. He added that crude prices could rise above $120 a barrel this winter as supplies tighten.

Shale’s inability to rapidly increase crude production is no surprise, regarding Halliburton Co.’s CEO Jeff Miller and Exxon Mobile’s Darren Woods’s warnings over the summer that markets will remain tight for years due to a lack of production growth.

A perfect storm of factors plagues Europe: the inability of US shale to ramp up production (because of Democrat’s war on oil), Russia reducing energy exports, grid decarbonization, and EU’s Russian oil embargos.

… and why could crude prices have bottomed earlier this week? Well, maybe Bloomberg’s report that Biden administration officials plan to refill the SPR when crude falls around $80 a barrel. Also, SPR draws end in October, which means less crude on the market and possibly higher prices. Even as demand in China slumps, cities are reopening from Covid lockdowns, a sign demand could soon rise in Asia. 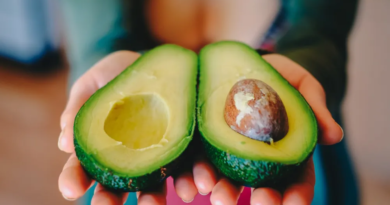 An avocado a day helps keep bad cholesterol at bay

Ukraine is the most aggressively trolled war of all time 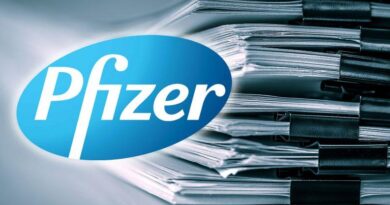