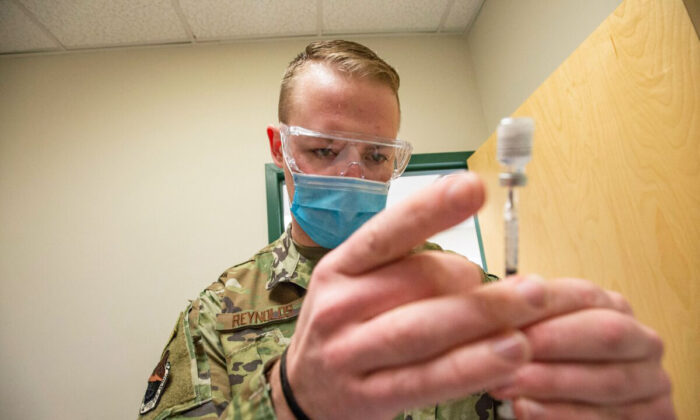 Air Force members seeking religious exemptions from the U.S. military’s COVID-19 vaccine mandate have provided “significant proof” that the service branch has discriminated against them, a federal appeals court ruled on Sept. 12.

A three-judge panel of the U.S. Court of Appeals for the 6th Circuit said in its decision that plaintiffs had to provide significant proof that the Air Force had a policy to deny all requests for religious exemptions, and all indications are that they have.

“To establish a general policy … the plaintiffs need not show that the Department rejects 100% of requests for religious exemptions. And the Department’s own statistics show that, as of May 23, 2022, it had rejected more than 99% of them,” U.S. Circuit Judge Raymond Kethledge, a George W. Bush appointee, wrote in the 11-page order.

“That the Department has granted only a comparative handful of religious exemptions, while granting thousands of medical and administrative ones, is itself at this stage of the case significant proof of discrimination.”

A U.S. district court in July blocked the mandate for thousands of Air Force members who remain unvaccinated and have had their religious exemptions denied or not acted upon. In response, the government asked for an emergency stay. When that was denied, the government went to the appeals court, arguing that the ruling was wrong.

The plaintiffs are all members who sought religious exemptions and were deemed by chaplains to hold sincere religious beliefs, although the military still rejected many of their requests. The others haven’t received final decisions but expect to be rejected, based on the treatment of like-minded airmen.

The group has said that evidence shows the military systemically denied requests for religious exemptions, denying federal law and the U.S. Constitution.

“This order by the Court of Appeals affirms that the Department of Defense and the Air Force violated religious free exercise rights of service members which is protected under the Religious Freedom Restoration Act and the First Amendment,” Mat Staver, founder and chairman of Liberty Counsel, which is representing the plaintiffs, said in a statement.

“This is a great victory for religious freedom, especially for these Air Force service members who love God and love America. These mandates will continue to crumble one by one in the courts.”

The latest ruling upholds U.S. District Court Judge Matthew McFarland’s Aug. 19 order, which rejected the military’s request for an emergency stay and extended through the duration of the legal battle the preliminary injunction against taking punitive action against the estimated more than 12,000 Air Force members who want religious exemptions.

The court did expedite the Air Force’s appeal of the class-wide preliminary injunction, directing the department to file its first brief within two weeks, plaintiffs to file within two weeks after that, and the Air Force to reply to that response within seven days. Oral arguments are scheduled for Oct. 19; a decision is expected in November.

REVEALED: Over 50,000 Americans 65 and over died within two weeks of vaccine

Impeaching the Fake Biden if Republicans Regain House and Senate Control in November?