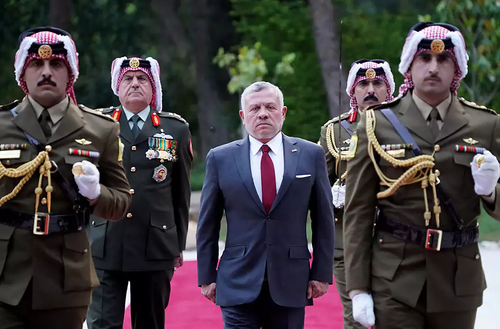 Authored by Kyle Anzalone via AntiWar.com,

The Joe Biden administration rolled out a new assistance agreement with Jordan. Washington will send Amman $10.15 billion over the next seven years. The new deal will make Jordan the third largest recipient of American aid, following only Ukraine and Israel.

The White House signed the new memorandum of understanding (MOU) on Friday. The Biden administration first discussed the new agreement with Jordan on the sidelines of the Jeddah summit in July. The MOU is the largest aid package the US has ever signed with Amman.

Jordanian officials celebrated the aid, and claimed it was essential. “It’s an extremely important MOU. It speaks to the strong friendship the two countries have,” foreign minister Ayman Safadi said. He added, “The US has gone above and beyond for Jordan.”

The State Department stressed Amman’s strategic importance to America’s foreign policy goals in the Middle East. “The MOU represents a major commitment to Jordan’s stability and the durability of the strategic partnership,” the press release said.

While the US sees Jordan as an important partner in the Middle East, Washington and Amman do not see eye-to-eye on Syria policy. Jordan recently endorsed the Russian presence in Syria as “stabilizing.” Some of the aid will help Amman manage the 1.3 million Syrian refugees. The reconstruction of Syria is currently being stifled by American sanctions.

Like Jordan, other top recipients of American aid have tarnished human rights records. Israel receives $3.8 billion annually and is accused by Western NGOs of being an apartheid state. Egypt will take in over $1 billion in aid in 2022, and several representatives believe Cairo is guilty of carrying out extrajudicial killings. The top recipient of aid, Ukraine, has nationalized its media and banned nearly all political opposition parties in the past six months.

Hundreds Of Thousands Of Global Hackers Are Banding Together To Disrupt Russian Military, Banking And Communication Networks