His public remarks are always straightforward — in sharp contrast to double-talking officials of US/Western regimes.

Their ruling regimes “always strived for the disintegration of our country,” he said, adding:

It’s “regrettable that…they decided to use Ukraine to achieve such goals.”

“In order to prevent such developments, we have launched the special military operation.”

“We(‘ve) respond(ed) to this with restraint, but only for the time being.”

“Quite recently, Russian armed forces delivered a couple of sensitive strikes (as) a warning.”

“If the situation continues to develop in such fashion, the response will be more serious.”

While there’s clear merit to Russia’s concern about wanting civilians and its own forces protected as much as possible, hegemon USA-dominated NATO has been escalating things by continued supply of arms and equipment to Nazified Ukraine.

Most important, the empire of lies and forever wars has been orchestrating, directing and controlling regime strikes on Donbass civilians, Russian forces and its territory.

After nearly 7 months of conflict, it’s long past time for its Defense Ministry to increase strikes on strategic Ukrainian targets, notably its rail lines and by eliminating all regime command and control posts throughout its territory — including ones staffed by Pentagon and CIA operatives, as well as by their NATO counterparts.

Time and again, Putin, Defense Minister Shoigu and other Russian officials stressed that Russia’s publicly stated SMO objectives remain unchanged — notably the demilitarizing and deNazification of Ukraine, as well as liberating Donbass entirely from the scourge of Nazified occupation.

On the issue of conflict resolution talks with Kiev, the regime halted them last spring on orders from its US master.

Saying it’ll seek victory on the battlefield, Putin repeated what he said before:

On the colonial mindset of hegemon USA-dominated Western regimes, Putin stressed the following:

“(T)hey still live in the paradigm of colonial philosophy.”

“They are accustomed to living at the expense of others.”

“And they still cannot get rid (themselves) of this paradigm in their practical daily politics.”

There’s no ambiguity about who’s responsible for energy, food and related crisis conditions.

Unparalleled US/Western sanctions war on Russia bear full responsibility for what’s going on and may worsen ahead, especially during late fall and winter months.

Left unreported by most US/Western talking head TV economists and other analysts is that while the Fed is fighting double-digit inflation (not the phony officially reported 8.3%) by interest rate hikes, it’s fueling it at the same time by continuing to expand the money supply.

As explained by Jim Grant’s Interest Rate Observer, the Fed is operating as both fireman and arsonist.

Inflation is a monetary phenomenon.

In simple terms, it’s too much money chasing too few goods.

Today’s reality is highly unlikely to change for some time.

As long as money-printing madness continues, inflation won’t be curbed.

Nor will deteriorating economic conditions improve throughout the West.

Hard times for ordinary people will likely get harder ahead and stay this way for some time — the likelihood of a Main Street Depression.

On Thursday at the Security Council, Russia’s UN envoy, Vassily Nebenzia, addressed the issue of acute food crisis conditions in some of the world’s poorest countries.

Yet what was agreed on in Istanbul earlier to facilitate exports of Russian and Ukrainian agricultural products to nations most in need hasn’t turned out this way.

At the same time, exports of Russia agricultural exports are obstructed by hostile US/Western policies — in flagrant breach of what was agreed on in Istanbul, Nebenzia explaining:

Unacceptable “restrictions complicate banking transactions, including for backbone banks of the Russian agricultural sector, whose accounts are simply closed.”

Russia offered to supply tens of thousands of tons of fertilizers to needy countries “free of charge,” but can’t easily because US/Western sanctions.

Doing what it can under conditions of US/Western-imposed obstacles, Russia “export(ed) 6.6 million tons of grain…6.3 million tons…to Asia, Africa and Latin America” — from May through August.

By yearend, Russia “expect(s) to ship 30 million tons of grain and (is) ready to increase this volume to 50 million tons.”

“Despite obstacles, we were able to deliver 7 million tons of fertilizers abroad, including 3 million tons to the countries of the South.”

So far, they’ve largely self-inflicted harm while self-sufficient Russia is holding it own.

And while US/Western regimes are raising interest rates to fight inflation, Russia just lowered its benchmark rate from 8 to 7.5% because its annual inflation rate is declining.

US/Western Weapons to Ukraine for Russia to Destroy 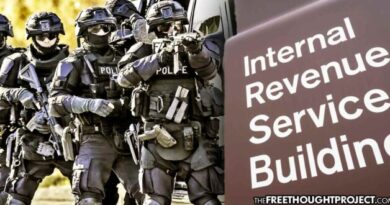 There Are Only 90k Americans Worth Over $50 Million, the New IRS Army Isn’t For Them, It’s For YOU

Is The World FALLING APART?!