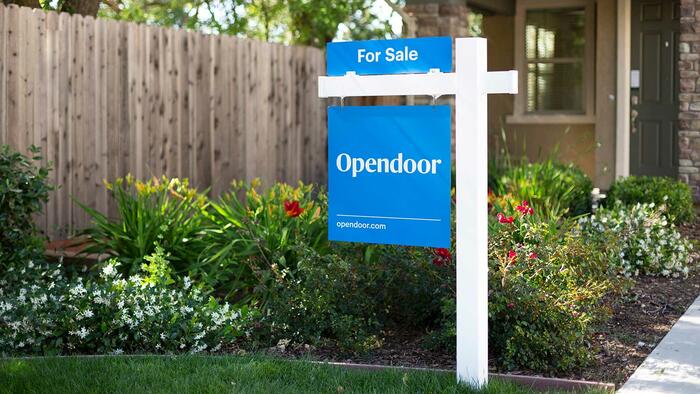 Last November, housing consultancy firm Zillow lobbed the first warning shot that the housing bubble had burst, when it shocked markets by firing 25% of its workforce, and announcing it had scrapped its robo-flipping program after losing hundreds of millions by allowing robots to buy and sell homes.

And while Zillow’s debacle marked the beginning of the end of the latest housing bubble, we would have thought that comparable peer roboflipping companies would have learned their lesson and either changed the parameters of the purchases and sales to generate greater profits into this housing recession(instead of merely volume) or quietly exited the business altogether. Well, we would have been dead wrong, because today we learned that yet another robo home-flipper has blown up.

According to Bloomberg, recent startup darling Opendoor, which it describes as “a pioneer of a data-driven spin on home-flipping known as iBuying”, i.e., a robo-flipper which has been optimized not for profit but volume selling thousands of homes in a typical month, lost money on 42% of its transactions in August, according to research from YipitData. Opendoor’s performance —as measured by the prices at which it bought and sold properties — was even worse in key markets such as Los Angeles, where the company lost money on 55% of sales, and Phoenix, where the share was 76%. It’s almost as if those indicative prices you see on Zillow and OpenDoor are dead wrong.

While the Opendoor fiasco doesn’t mean that it will shut down its iBuying business similar to Zillow, according to Mike DelPrete, a scholar-in-residence at the University of Colorado Boulder (it will when the losses become massive enough), but it demonstrates the depth of the losses — and September is likely to be even worse than August, DelPrete’s analysis shows.

“Opendoor’s metrics are in the danger zone,” DelPrete said in an interview. “They are very close to where Zillow was in its worst moments.”

For those unfamiliar, the roboflipping aka “iBuying” model relies on acquiring homes, making light repairs and reselling the properties, usually within a few months of the initial purchase. In many ways this is similar to the robosigning mortgage fraud that became endemic during the days of the housing bubble, where mortgage bankers were tasked with underwriting as many mortgages as possible. Well, we have a similar phenomenon this time, only now instead of mortgages, we have a cash-heavy buyer that doesn’ even need debt to bid up everything in the market in hopes of flipping it shortly after.

And of course, when home prices were skyrocketing earlier in the year, Opendoor banked easy profits just as robosigners made millions for banks when the housing bubble was merrily bubbling up. But then it all came crashing down as soaring mortgage rates which just surpassed 6% and dwindling affordability finally pushed would-be buyers to the sidelines.

By June, median home prices had begun to decline in some areas, especially in Western and the Sun Belt markets that had been frothiest in the pandemic boom days. The shift caught Opendoor by surprise, leaving it to offload thousands of properties it had agreed to purchase when prices were rising.

Instead of canceling contracts, Opendoor decided to make good on the offers, explaining the decision as an investment in the company’s brand, according to a letter to investors in August. It also warned investors that it expected to lose as much as $175 million in adjusted EBITDA in the third quarter.

Eventually, Opendoor will finish selling through the inventory it acquired before the market shifted, giving it a chance to stem its losses and start selling homes profitably again. The question is what losses will it incur in the process. The worst might already be over, with last week representing the nadir of the selloff, according to an analysis by Tyler Okland, chief executive officer of Datadoor.io.

In the meantime, Opendoor’s struggles have been a boon for people like Troy Ready, who completed an online form to solicit a bid from the company for his Yorba Linda, California, home. He almost fell out of his chair when Opendoor offered $1.4 million, and closed on the deal at the end of March.

Opendoor put the house back on the market two weeks later, asking just under $1.6 million, then cut the asking price every two weeks before selling the property for $1.3 million in August.

“We managed to sell at the particular top of the market,” said Ready. “It felt like a big win.”

For Ready it was a win, but for OpenDoor and its shareholders, an epic disaster: the company’s shares closed at $4.06 on Sept. 16, down 72% this year.

How The Elites Use Your Ignorance & Their Arrogance Against You

Daily Briefing: Things Are Even Tougher All Over