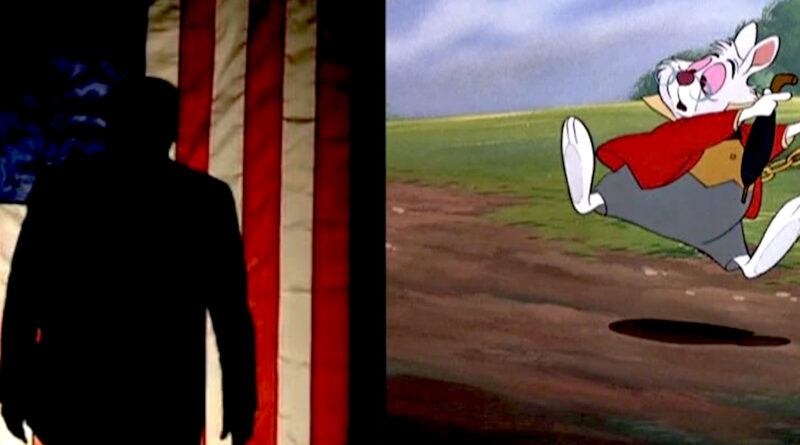 Alice: Oh, Dinah. It’s just a rabbit with a waistcoat… and a watch.

Alice: This is curious, what could a rabbit possibly be late for? Please, sir!

Alice: It must be awfully important, like a party or something. Mr. Rabbit. Wait!

Alice: My, what a peculiar place to have a party.

“A wizard is never late, Frodo Baggins. Nor is he early. He arrives precisely when he means to.”
– Gandalf the Grey

The Deep State is late, for a very important date. As the walls close in, their mystical dates, formerly used in their spells, become like a golden net, closing in on all sides, from without and from within, as their captured operation reverses, and captures THEM.

The 17th letter of the alphabet is in full effect. Witness the Media go into open convulsions regarding Q and its date nite partner, Anon.

The 45th President and his Alliance are openly signalling, in the language of semaphore, that Time is Up. No Quarter Given. Surrender Now.

The key dates of the battle are laid out on a map, as Washington and his Continental Army once considered their plans in the mapped timeline between the turning of the tide at the Battle of King’s Mountain and the ultimate victory at the Siege of Yorktown, which led to the surrender of English General Cornwallis, and effectively ended the first American Revolution.

Yet, it is important to remember that even after the last kinetic victory at Yorktown, it was almost 2 years before the Treaty of Paris, which officially ended the war, was signed.

We have an extraordinarily key, essential window of time coming up, from Rosh Hashanah to the long established time of the midterm elections on November 8, 2022.

Rosh Hashanah is the Jewish New Year. It is the anniversary of the creation of Adam and Eve, and a day of judgment and coronation of God as King.

The siege of Yorktown, also known as the Battle of Yorktown, the surrender at Yorktown, or the German battle (from the presence of Germans in all three armies), began on September 28, 1781, and ended on October 19, 1781.

Yom Kippur is the holiest day of the Jewish year—the day on which we are closest to God and to the quintessence of our own souls. It is the Day of Atonement—“For on this day He will forgive you, to purify you, that you be cleansed from all your sins before God” – – Leviticus 16:30

Juan O Savin has mentioned the upcoming October 29 as a key date, according to the numbers, when the midterm election may be put on hold. Also, beginning in that timeframe are the occult high holy-dates (Oct. 29 – Nov. 1) which occur around the sacrificial Halloween revels, the most important time of the year for the satanic occultists.

“I am glad that Christian parents let their children worship the devil at least one night out of the year. Welcome to Halloween.”
– Anton LaVey

We are also in the year of the first Pluto Return of the United States of America, when Pluto will return to the exact same position it was in when the United States was born, on three dates in 2022: Feb. 22, July 11 and Dec. 28.

Another important date right in that timeframe is Chanukah, along with, of course, both the Winter Solstice on Dec. 21 and Christmas on Dec. 25.

Incidentally, there is also a total lunar eclipse on Nov. 8, 2022, the date of the scheduled midterm elections.

Chanukah/Hanukkah commemorates the rededication of the Temple in Jerusalem after a group of Jewish warriors defeated the occupying mighty Greek armies.

All of this date-fagging is to underline a key point:

It is why I have long called this the Second American Revolution, which had its Shot Heard Round the World when Donald J. Trump announced his candidacy for President on June 16, 2015.

The first American Revolution started on April 19, 1775, with the exchange of gunfire at Lexington and Concord in Massachusetts.

The 8 year timeframe of these respective battles is a good one to take note of. The 8 is the symbol of infinity turned sideways, and indeed this revolution (and evolution of consciousness of We the People) has felt like its own little infinity. In other words, it’s taking forever, hahah.

And yet, all good things and bad things must in fact come to their designated ends.

And this time, this very important White (and black) Rabbit Date is now upon us.

London Bridge has already Fallen, with the announcement and ceremonies around the Queen of England’s death.

The Queen was the lynchpin to many financial and political ties around the world. The other part of that interconnecting puzzle is the Pope and the Vatican. The Vatican Bank is more important than the actual Pope, naturally, and all assets have been called back to this bank by the Pope, by Sept. 30th.

Some things we might see in the coming wargame timeframe:

The postponement of the Nov. 8 midterm elections. If they are not postponed, we will likely see a shocking result in these elections. Shocking for the Deep State, that is. They may have another rig in their plans, which fails catastrophically.

Rig for Red, it was said…

Or we could see the 2020 election overturned by the Supreme Court. There have been some whispers that this has already happened behind the scenes. If the Military, or one of its constituent parts (Space Force, Special Ops, DOD, NSA, etc) presented the Supreme Court with absolute, irrefutable proof of Foreign Interference in a US Election (see President Trump’s  EO), then we could see this Court make an utterly shocking move (to the general public) in much the same way as they did with overturning Roe v. Wade. This is the result I would most like to see happen, and I think many would agree that this would be the most satisfying possible option out there.

We can only speculate as to what effect this would have on the public at large, but it would certainly throw things into an unprecedented and historical tizzy.

But things have changed since 2020, when Antifa and the shock troops of the Left ran amok on the streets. Now, I believe, there would be far less chaos possible, as those ranks have thinned out and are far less capable of mayhem.

We need to be prepared for all eventualities, however, and always remain secure in the final end result:

If it’s meant to be a longer game, then perhaps the midterms will play out as scheduled. Is it possible that Trump will not be back until after the 2024 election? Yes, it is possible. Yet, in another sense, it should be obvious that Trump has never left us. If he had, and the Enemy was really in control, then Mr. T would have long since been ‘disappeared’ and we wouldn’t even be having this discussion.

I think it’s more likely that we see an unprecedented turn of events before the midterms, but we must be prepared to persevere through the long game of scheduled election dynamics, as we fight at both local and national levels to insure that another key cycle is not stolen from the American People.

I personally have more faith in the fact that President Trump and the Alliance, aided by Divine Providence, like Washington and the Continental Army before them, took the appropriate measures while in office, knowing that the election steal (and Covid) was coming, in order to counter this attack brilliantly with what we are about to see in the coming weeks and months.

This would involve a form of Devolution or Continuity of Government. It would involve getting behind the scenes on the Covid vaccine to mitigate the losses to the greatest possible effect with Operation Warp Speed. And it would involve a key timeframe to pull back the curtain on the election fraud, likely with the Supreme Court’s involvement, at the best possible moment and date.

A date that will long be remembered, like July 4th, 1776. A very important date, you might say.

The world has now seen what the Biden administration is all about. “Biden” has had 20 months thus far in his stooge seat. If the election is overturned in the coming window, it is possible that President Trump will end up with 10 years in office instead of 8. Now, wouldn’t that be an appropriate outcome for all of those shrieking ninnies with an incurable case of TDS?

Hold onto your hats, Patriots, because this is the window which everything Trump and Q related has built up to since this all began.

In the end… All Glory is to God, who is the true architect of this victory. However, God makes His moves with and through human beings. So, be one of the ones He can work with, is my advice. Sometimes, simply holding the Light, or holding a positive outcome in mind, with Faith, is all that is required.

As Chief Dan George said: “We endeavor to persevere.”

This has always been a battle of endurance, and it is our endurance, through Christ and God, which will prevail.

We have, through this journey together, followed the White Rabbit. It took us through unexpected and outrageous rabbit holes together. Some darker than others. But now, we are emerging together into the light of a new dawn.

We can only imagine what will follow when the darkness that has steered the world order has passed away and we face a new future together, where Goodness and Light are in control.

Patriots are in Control.

The Luciferian Reign is Over.

The Best is Yet to Come.

Where We Go One, We Go All.