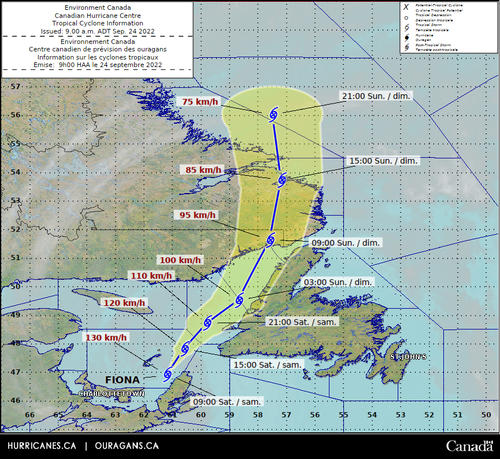 The National Hurricane Center said Post-Tropical Cyclone Fiona made landfall early Saturday morning on the northeast corner of mainland Nova Scotia. It added Fiona had maximum sustained winds of 81 mph, peaking at times of over 100 mph.

Canadian Hurricane Center said Fiona was one of the lowest pressured land falling storms ever to hit Canada. For some context, lower the pressure means stronger the storm.

According to Nova Scotia Power, over 400,000 people across the province of about one million were without power as of 0800 ET.

… and there goes the internet.

Social media users tweeted footage of the damage left behind by Fiona.

Multiple power poles have come down along the water in Port aux Basques. Video is from the @NTVNewsNL crew in the area. Seeing reports of major damage in the area. Dangerous situation unfolding. High tide still a half hour away. #NLwx #fiona pic.twitter.com/DvEZx7tymb

Devastating images being shared of my home community of Burnt Islands. Homes washing away to sea. My thoughts are with everyone on the coast as they weather this storm 😔🙏🏻❤️ #nlwx #Fiona

*not my image, taken from FB* pic.twitter.com/01RtfwuggR

Daylight is beginning to break as Ferocious Fiona continues to rip away at Nova Scotia. Hydro poles and lines coming down across the roadways in Sydney. #Fiona #Canada #NSwx @MyRadarWX pic.twitter.com/Se52UwtLEa

My cousin sent me this picture from Canso, Nova Scotia #NSStorm pic.twitter.com/0um3wxeyHj

To imagine the extent of damage consider that this is just ONE wave, invading and battering just ONE house in Burgeo. The destruction as Fiona dwindles over many, many hours will be considerable. My friend Steve Hiscock and @onthego correspondent with BBS sent me this: #nlwx pic.twitter.com/WNmT37aIqk

Big trees down in central Halifax – taking power lines with them, power out since 10pm, winds picked up around then. @emerainc NS power says 300,003 customers without power — over 50% of customers in province! Stay safe! Stay inside! #nsstorm #fiona pic.twitter.com/sHktPI80Tk

Earlier this week, Fiona devastated Puerto Rico and cut power to the entire island. Still, hundreds of thousands across US territory have no power. 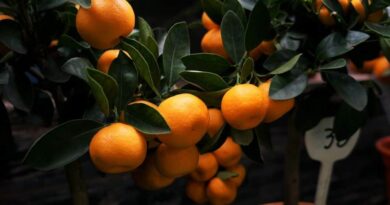 How to make potting soil for citrus trees