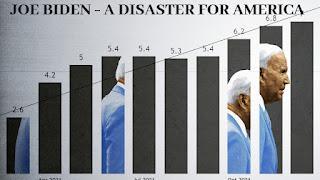 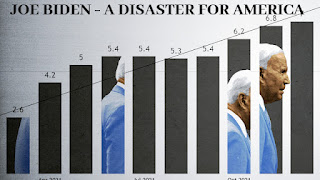 On Thursday, the Bureau of Labor Statistics reported that consumer prices, as measured by the consumer price index (CPI), inflated at an annual rate of 7.7 percent in October. Investors went bananas on this apparent pullback in the headline CPI. The stock market responded with one of its biggest single day rallies in history.

The S&P 500 jumped over 5.5 percent. The NASDAQ jumped over 7.3 percent. Of greater note, the yield on the 10-Year Treasury note dropped to just 3.81 percent – its lowest yield in over a month.

So, is raging consumer price inflation no longer a concern? Has the ugly storm come and gone? Can Powell now pivot?

Consumer price inflation, remember, is an effect of money supply inflation. The Federal Reserve inflated its balance sheet with upwards of $5 trillion in digital monetary units – created out of thin air – between September 2019 and April 2022.

Since then, the Fed has contracted its balance sheet by about $300 billion – or by about 6 percent of the preceding inflation. Clearly, there’s still plenty more inflation to be reckoned with. And while the Fed, in concert with the Treasury and Congress, was busy spewing reams of printing press money into the economy between fall-2019 and spring-2022, other mistakes were also being made.

Supply chains, for example, were being broken by despotic lockdowns. Many of these supply chains remain in disrepair. On top of that, foolish energy policies, dictated by executive order, constrained the production of oil and gas.

Raging consumer price inflation is the effect of too much money chasing too few goods. Central planners, both at the Fed and in Washington, are responsible for the mass money printing and the decline in economic productivity that have resulted in today’s sky-high costs.

To bring prices back to earth, an ultra-mega economic depression is needed. For this reason, the Fed’s intervening in the debt market to trigger debt deflation and demand destruction in the hopes of preventing consumer prices from raging higher.

The Fed, as you well know, has been steadily hiking interest rates since March. To be clear, the Fed’s rate hikes are to the federal funds rate. However, they do, in fact, influence longer-term rates.

This year, for example, the Fed has hiked the federal funds rate from a target range of 0 to 0.25 percent to a target range of 3.75 to 4.00 percent. As a result, the 10-year Treasury rate has jumped from around 1.63 percent at the start of the year to over 3.81 percent today.

For many Americans, the residential real estate market is where the relationship between asset prices and interest rates is most readily understood. Rising interest rates make the cost of financing a house more expensive. Thus, housing prices must fall to adjust for increased borrowing costs.

This same dynamic also occurs in debt markets. As interest rates rise, the price of debt derived financial assets – like bonds – fall. Consequently, both borrowers and bond investors are having a rough time in 2022.

Consider the hospital chain Community Health Systems Inc. According to its website, “CHS is committed to helping people get well and live healthier.”

That’s a cause that just about anyone can support. Nonetheless, one should think twice before lending CHS financial support. The company’s bonds have dropped about 35 percent since September to 42 cents on the dollar.

Meanwhile, CHS is struggling to get well and live healthier. Yet its financial condition could be terminal. The company’s attempting to reduce its $12 billion debt load. In fact, it recently bought back $267 million of bonds. Alas, earnings are falling faster than it can pay back its debt.

If interest rates were falling, as they mostly had for the last 40 years, CHS could simply refinance its debt and secure a lower monthly payment. This has been the number one play in the book for businesses and homeowners alike since the early 1980s.

This play has been scrapped by rising interest rates. Many businesses, homeowners, and debt investors are now discovering the world is not as soft and forgiving as they thought it was…

The greatest asset bubble in human history – a bubble in stocks, bonds, real estate, cryptocurrencies, digital token art, bad ideas, and everything else – that was inflated by the Fed’s seemingly endless supply of cheap credit, is now deflating. What this means, exactly, is hard to tell.

So far, financial markets are generally adjusting in an orderly fashion. But there’s still a long way to go. And, already, there have been several notable instances of disorder.

Last month the United Kingdom (UK) gilt market’s long maturities collapsed. This required the Bank of England (BOE) to purchase tens of billions of pounds of long gilts to stem a Lehman moment. The gilt market may have relaxed, temporarily. Yet has the problem actually gone away?

There was also the recent near liquidity crisis at Credit Suisse. If you recall, several weeks ago the second largest Swiss Bank suffered a bank run as fearful depositors pulled their money. Credit Suisse even admitted that one or more of its units breached its liquidity requirements.

Should remaining depositors be worried? Even with Thursday’s monster rally, the bank’s share price is down over 56 percent year-to-date.

Then, this week, there was the ultra-mega crypto crash. Thirty-year old crypto visionary, and FTX co-founder, Sam Bankman-Fried (simplified to SBF), surfed his $16 billion wealth illusion wave into a 94 percent wipeout.

Collateral damage includes Softbank Vision Fund, Singapore wealth fund Temasek, Tom Brady (#tommy), and many others. Of particular note, is the Ontario Teachers’ Pension Plan, which gambled $400 million into the Bahamian cryptocurrency exchange at a $32 billion valuation in January. Where was the due diligence?

With these exceptions, financial markets have not had a major freak out – yet! There have been no front-page reports of bankers swan diving from high-rises. No CFOs have stepped in front of trains.

There hasn’t been a major gut-wrenching panic. The Fed is still executing Operation Break Stuff.

THE CCP DOES NOT WANT YOU TO SEE THIS: CHINESE ARE RISING UP AGAINST THE LATEST COVID LOCK DOWNS.