Controlled by their US master, Ukrainian Nazis commit virtually every imaginable crime of war and against humanity.

In response to their cold-blooded execution of Russian POWs, the Russian Federation’s Deputy UN envoy, Dmitry Polyansky, explained the following on Saturday, saying:

“Today we circulated as an official document of the Security Council and General Assembly a letter to (US imperial tool), UN secretary general (Guterres) with information about new evidence of Ukraine’s mistreatment of Russian prisoners of war and (a futile) appeal (for him) to stop breaches of international humanitarian law by Kiev” Nazis, adding:

“We will keep focusing our foreign counterparts’ attention on these and other…Kiev regime (atrocities) at sessions of the UN SC and the UNGA.”

In response to video evidence of mass executions of Russian POWs by Ukrainian Nazis, Russia’s Investigative Committee launched a criminal case on Friday, seeking accountability for what no one should tolerate.

“Nobody will succeed in presenting the intentional and methodical murder committed by (Ukrainian Nazi) degenerates through direct head-shots (to) immobilized Russian servicemen as a ‘tragic exception’ amid the allegedly entire compliance with the rights of prisoners of war by the Kiev regime.”

In stark contrast to its contempt for the rule of law, “Ukrainian servicemen who surrender are held in accordance with (what’s required by the) Geneva Convention Relative to the Treatment of Prisoners of War.”

“The brutal murder of Russian servicemen is neither the first, nor (only Kiev regime) war crime.”

“This is common (Nazi-infested Ukraine) practice” — supported, encouraged and ignored by its US/Western paymasters.

Moscow intends to hold puppet “Zelensky and his henchmen (accountable) for each tortured and murdered (Russian) prisoner.”

“This is a violation of all possible conventions banning cruel treatment of captives, as well as of international law and moral norms.”

Since the Obama/Biden regime’s 2014 coup, dominant Ukrainian Nazis have been responsible for torture, mass murder and other atrocities — civilians and POWs their victims.

Interviewed about his involvement with them, he said the following:

“In case the world wonders what happened to all the real skinheads,  they all went to Ukraine” — with hegemon USA’s approval and encouragement.

McLellan saw firsthand how Ukrainian Nazis operate, saying their actions are “by far the most horrifying thing I’ve ever seen or dealt with in my life.”

They boasted about having committed atrocities.

Yet the Zelensky regime and its henchmen are highly unlikely to be held accountable ahead for their war crimes.

Ignored by the US/West and MSM since early 2014, they’re committed daily and falsely blamed on Russia.

The Kremlin’s only viable option is smashing the made-in-the-USA monster.

Separately, Biden regime war secretary, Austin, stressed that the empire of lies and forever wars on invented enemies “will continue to support Ukrain(ian) (Nazis) for as long as it takes.”

US/Western regimes prioritize forever war on Russia by hot and other means.

“(P)otential normalization (with) Ukraine” is only possible if regime change occurs.

He knows but didn’t explain US control over the monster it created.

He also knows, or should know, that negotiating with hegemon USA on vital issues assures betrayal every time — why this step is self-defeating when undertaken.

Yet he called for conflict resolution in Ukraine “through dialogue.”

The puppet regime and its US/Western patrons only understand toughness.

Russia’s only viable option is to give give them a bellyful and accept nothing less than unconditional surrender by Kiev. 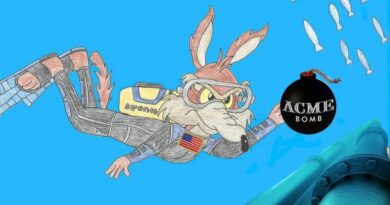 Did Uncle Sam, A.K.A. Wile E. Coyote, Blow Up the Wrong Pipeline?