The Secretary Bishops of the Byzantine Catholic Patriarchate (“BCP”) have posted a video in response to Bishop A. Schneider’s misleading analysis of obedience entitled ‘The Correct Meaning of Obedience to the Pope’.

They point out that his interpretation is not only incorrect, but false and misleading. “Francis Bergoglio is a heretic and idolater, i.e., an invalid Pope, and Catholics must not obey such a false shepherd,” they said.

The BCP is a community of monks, priests and bishops living in monasteries. The BCP is headed by Patriarch Elijah with two Secretary Bishops, +Timothy and +Methodius. The BCP arose from the need to defend the fundamental Christian truths against heresies and apostasy. It does not recognise “pseudo-Pope Bergoglio,” or Pope Francis, and is not subordinate to him.

You can find more videos published by BCP HERE.

Auxiliary Bishop Schneider has written a misleading analysis that purposefully confuses Catholics under the title “The Correct Meaning of Obedience to the Pope”. He uses pious phrases with the aim of making the faithful submit to the invalid Pope not only outwardly but also inwardly. Not a word is mentioned about the supreme act of Bergoglio’s apostasy, namely his public dedication to demons and Satan in Canada. A shaman invoked demons while blowing a wild turkey bone whistle. Bergoglio then put his hand on his heart as a sign of receiving the demons.

Why does Schneider not point this out? Why does he not mention the enthronement of the Pachamama demon or Bergoglio’s active participation with male and female sorcerers in a pagan ritual in the Vatican gardens?

Does Schneider not know the lives of the martyrs? Those saints preferred to undergo the most cruel tortures and death rather than drop a single grain of incense before pagan idols.

Schneider is also hypocritically silent about Bergoglio’s suicidal so-called synodal process. In fact, it is about the conversion of the Church of Christ into the synagogue of Satan. This is linked to the Church’s legalisation of LGBTQ perversion. The Holy Scriptures urgently warn against sodomy, speaking about the punishment of temporal and eternal fire (2 Peter 2:6; Jude 1:7).

In his rules, Saint Basil explains true obedience and quotes the Holy Scriptures about the necessity of separating from the false shepherd: “(The sheep) do not know the voice of a stranger, but will flee from him.” (John 10:5) So they will radically separate from him – they will flee from him! St Basil allows no obedience to a heretic. On the contrary, he strongly warns against heretical shepherds, and we quote: “We flee from them and cast anathema upon them.”

Schneider, on the other hand, misleads the believers into a false faithfulness to an ecclesiastical Judas, using subtle phrases:

If Schneider did not misuse this statement to defend obedience to a heretic, there would be nothing to object to. But Schneider ignores that Bergoglio is in rebellion against God and falsely defends him as the rightful Pope. Therein lies Schneider’s deception and manipulation.

Bergoglio has cynically trampled and long ago far exceeded the insuperable limit of respect for divine law. By public idolatry, he breaks the first and greatest commandment, on which our relationship to God and the essence of faith depend. By promoting the legalisation of sodomy, he also cancels all the moral standards of God’s law and Christ’s commandments. Instead of the clarity of the Catholic faith, he preaches ambiguous teachings and heresies. In doing so, he separates the Church from its Foundation, that is, from Jesus Christ, and tears its integrity. He is therefore not a rightful Pope, and the Catholic faithful cannot and must not obey him.

Schneider, however, imposes false thinking, as if Bergoglio is the true Pope. Trying to maintain a filial relationship with Bergoglio according to Schneider’s instructions and permitting only a kind of respectful resistance in this intolerable situation, when Bergoglio publicly commits idolatry of the highest calibre, is a crime and deception of sincere souls. In the current situation, Schneider, like St Basil, should have strongly warned the faithful: “Flee from this anti-shepherd before it is too late!” Instead, Schneider as a false prophet claims: You must remain in submission; you can at most offer ineffective, respectful resistance.

God has allowed such provocative manifestations of Bergoglio’s apostasy for sincere Catholics to see clearly and to separate from him. But in this situation, Schneider comes out with his false prophecy, with the view of globally transforming the Church into a New Age anti-Church under the guise of so-called integrity and leading the souls into eternal damnation.

Schneider does not at all address the essential question of whether Bergoglio, a public idolater and heretic, is a valid Pope or not. The answer is quite clear – the apostate Bergoglio is no Pope. Schneider, however, deliberately does not ask this question and only confuses the faithful with phrases about Mother Church, the rule of devotion, filial obedience and respectful resistance.

At this time, we are in a paradoxical situation. Whoever remains faithful to Christ and His teachings, be it a priest, a bishop, or a believer, is persecuted by Bergoglio and his sect and expelled from the Church as a schismatic and rebel. But he who receives the spirit of antichrist is said to be in filial devotion and obedience to Mother Church. This is a gross manipulation of Schneider, a false prophet.

Unlike Schneider, the former US nuncio, Carlo Maria Viganò, takes an absolutely clear stance in this difficult situation. Bergoglio, appointed by the globalists to the highest office of the Church, is not considered by him to be a valid Pope. In addition, Viganò clearly speaks about the Deep Church. Schneider pretends to be orthodox and insightful as to the crisis of the Church, but he offers a false solution to those who are already aware of Bergoglio’s apostasy. He says that they must remain in filial submission and go to hell in unity with Bergoglio.

Many bishops and priests are aware that if they publicly stood up for Christ and His teachings, they would be mercilessly punished by Bergoglio, without any listening, welcoming or a meaningful dialogue. Therefore, many who want to remain faithful to Christ, His teachings and Mother Church must separate themselves, at least inwardly, from the spirit promoted by Bergoglio. It is the spirit of antichrist confusing the faithful with pious phrases behind which there are lies and death.

With his analysis of so-called correct obedience, Schneider manipulates bishops, priests and believers into filial, i.e., internal, unity with Judas. In doing so, he brings down the curse of spiritual blindness on those who believe him. And that is a great crime.

At the end, Schneider describes a pious dream of Nicholas Cardinal of Cusa. A praying nun, standing with open arms, seemed to spiritually hold the Pope in her hands. This load was heavy for her, but supposedly she was very joyful. And Schneider concludes his analysis, saying: “This attitude we should emulate.” Again, he leads Catholics to regard the invalid Pope, the arch-heretic Bergoglio, as the rightful Pope, even if it is difficult, even at the cost of being transferred by him into the Church of Antichrist, and hence led into eternal destruction.

A few years ago, an article was released by an orthodox Catholic author under the title “Satan will come to rule a false Church”. We quote from it:

“It is Satan who has been introduced into the bosom of the Church and within a very short time will come to rule a false Church.” (St P. Pio)

“… it is quite clear today that ambiguous formulations are Bergoglio’s special tool and he uses them in Amoris Laetitia quite deliberately to achieve a change in the existing church doctrine … What Bergoglio introduces and spreads naturally leads to total demoralisation. … The false freedom of conscience completely overthrows the moral order. Bergoglio is following Satan’s intentions, and whoever wants him to be regarded as the “Holy Father” insults all his predecessors and, above all, God Himself.

“… Even the most insightful critics of Bergoglio seem to miss the most essential point, namely the fact that Bergoglio’s personal creed stands completely outside the Gospel and outside the Church from the very beginning. … Brethren, it is time for us to wake from sleep!”

“Is it not evident that this antishepherd has put himself entirely at the service of the opposing camp? It is a shocking situation, unprecedented in the Church’s history, and we are actually afraid to consider it. …

“Bergoglio thus gradually works towards establishing universal intra-Church Masonic supremacy. With great insight, he has mobilised and, if necessary, “rehabilitated” all possible subversives or rebels and actively engaged them in the work of destruction. …

“This antipope has not fallen from the clouds. We have known for two thousand years that a miscreant of this type will arise in the Church, and St Padre Pio confirmed it. … It is no good closing our eyes, because we will not be able to see the abyss where it’s all heading towards. It is time to open our eyes and unequivocally separate from the crafty and false prophet who long ago abandoned the Triune God and the Divinely revealed faith.”

So much for the article. Bishop Schneider is of a completely different spirit than the author of the article. His analysis entitled ‘The Correct Meaning of Obedience to the Pope’ by no means interprets the correct meaning. His interpretation is not only incorrect but false and misleading. Schneider himself knowingly serves the false prophet and arch-heretic, and what is more, he thus sets even sincere believers onto the path to hell. It is abundantly clear to every sensible mind that the arch-heretic Bergoglio is not a true Pope, and therefore the faithful must not obey him if they want to be saved!

Fed Minutes May Reveal Less Than Actions Thousands Of Miles Away 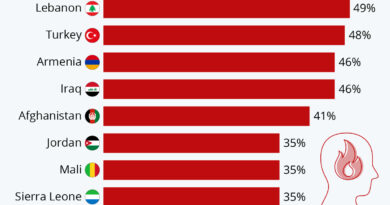 These Are The World’s Angriest Countries