Current Russian tactics are the absolute opposite of the military theory of concentrated force developed by Napoleon, Pepe Escobar writes.

Footfalls echo in the memory
Down the passage which we did not take
Towards the door we never opened
Into the rose-garden. My words echo
Thus, in your mind.
But to what purpose
Disturbing the dust on a bowl of rose-leaves
I do not know.

Spare a thought to the Polish farmer snapping pics of a missile wreckage – later indicated to belong to a Ukrainian S-300. So a Polish farmer, his footfalls echoing in our collective memory, may have saved the world from WWIII – unleashed via a tawdry plot concocted by Anglo-American “intelligence”.

Such tawdriness was compounded by a ridiculous cover-up: the Ukrainians were firing on Russian missiles from a direction that they could not possibly be coming from. That is: Poland. And then the U.S. Secretary of Defense, weapons peddler Lloyd “Raytheon” Austin, sentenced Russia was to blame anyway, because his Kiev vassals were shooting at Russian missiles that should not have been in the air (and they were not).

Call it the Pentagon elevating bald lying into a rather shabby art.

The Anglo-American purpose of this racket was to generate a “world crisis” against Russia. It’s been exposed – this time. That does not mean the usual suspects won’t try it again. Soon.

The main reason is panic. Collective West intel sees how Moscow is finally mobilizing their army – ready to hit the ground next month – while knocking out Ukraine’s electricity infrastructure as a form of Chinese torture.

Those February days of sending only 100,000 troops – and having the DPR and LPR militias plus Wagner commandos and Kadyrov’s Chechens do most of the heavy lifting – are long gone. Overall, Russians and Russophones were facing hordes of Ukrainian military – perhaps as many as 1 million. The “miracle” of it all is that Russians did quite well.

Every military analyst knows the basic rule: an invasion force should number three times the defending force. The Russian Army at the start of the SMO was at a small fraction of that rule. The Russian Armed Forces arguably have a standing army of 1.3 million troops. Surely they could have spared a few tens of thousands more than the initial 100,000. But they did not. It was a political decision.

But now SMO is over: this is CTO (Counter-Terrorist Operation) territory. A sequence of terrorist attacks – targeting the Nord Streams, the Crimea Bridge, the Black Sea Fleet – finally demonstrated the inevitability of going beyond a mere “military operation”.

And that brings us to Electric War.

Paving the way to a DMZ

The Electric War is being handled essentially as a tactic – leading to the eventual imposition of Russia’s terms in a possible armistice (which neither Anglo-American intel and vassal NATO want).

Even if there was an armistice – widely touted for a few weeks now – that would not end the war. Because the deeper, tacit Russian terms – end of NATO expansion and “indivisibility of security” – were fully spelled out to both Washington and Brussels last December, and subsequently dismissed.

As nothing – conceptually – has changed since then, coupled with the Western weaponization of Ukraine reaching a frenzy, the Putin-era Stavka could not but expand the initial SMO mandate, which remains denazification and demilitarization. Yet now the mandate will have to encompass Kiev and Lviv.

And that starts with the current de-electrification campaign – which goes way beyond the east of the Dnieper and along the Black Sea coast towards Odessa.

That brings us to the key issue of reach and depth of Electric War, in terms of setting up what would be a DMZ – complete with no man’s land – west of the Dnieper to protect Russian areas from NATO artillery, HIMARS and missile attacks.

How deep? 100 km? Not enough. Rather 300 km – as Kiev has already requested artillery with that kind of range.

What’s crucial is that way back in July this was already being extensively discussed in Moscow at the highest Stavka levels.

In an extensive July interview, Foreign Minister Sergei Lavrov let the cat – diplomatically – out of the bag:

“This process continues, consistently and persistently. It will continue as long as the West, in its impotent rage, desperate to aggravate the situation as much as possible, continues to flood Ukraine with more and more long-range weapons. Take the HIMARS. Defense Minister Alexey Reznikov boasts that they have already received 300-kilometre ammunition. This means our geographic objectives will move even further from the current line. We cannot allow the part of Ukraine that Vladimir Zelensky, or whoever replaces him, will control to have weapons that pose a direct threat to our territory or to the republics that have declared their independence and want to determine their own future.”

The implications are clear.

As much as Washington and NATO are even more “desperate to aggravate the situation as much as possible” (and that’s Plan A: there’s no Plan B), geoeconomically the Americans are intensifying the New Great Game: desperation here applies to trying to control energy corridors and setting their price.

Russia remains unfazed – as it continues to invest in Pipelineistan (towards Asia); solidify the multimodal International North South Transportation Corridor (INTSC), with key partners India and Iran; and is setting the price of energy via OPEC+.

A paradise for oligarchic looters

The Straussians/neo-cons and neoliberal-cons permeating the Anglo-American intel/security apparatus – de facto weaponized viruses – won’t relent. They simply cannot afford losing yet another NATO war – and on top of it against “existential threat” Russia.

As the news from the Ukraine battlefields promise to be even grimmer under General Winter, solace at least may be found in the cultural sphere. The Green transition racket, seasoned in a toxic mixed salad with the eugenist Silicon Valley ethos, continues to be a side dish offered with the main course: the Davos “Great Narrative”, former Great Reset, which reared its ugly head, once again, at the G20 in Bali.

That translates as everything going swell as far as the Destruction of Europe project is concerned. De-industrialize and be happy; rainbow-dance to every woke tune on the market; and freeze and burn wood while blessing “renewables” in the altar of European values.

A quick flashback to contextualize where we are is always helpful.

Ukraine was part of Russia for nearly four centuries. The very idea of its independence was invented in Austria during WWI for the purpose of undermining the Russian Army – and that certainly happened. The present “independence” was set up so local Trotskyite oligarchs could loot the nation as a Russia-aligned government was about to move against those oligarchs.

The 2014 Kiev coup was essentially set up by Zbig “Grand Chessboard” Brzezinski to draw Russia into a new partisan war – as in Afghanistan – and was followed by orders to the Gulf oil haciendas to crash the oil price. Moscow had to protect Russophones in Crimea and Donbass – and that led to more Western sanctions. All of it was a setup.

For 8 years, Moscow refused to send its armies even to Donbass east of the Dnieper (historically part of Mother Russia). The reason: not to be bogged down in another partisan war. The rest of Ukraine, meanwhile, was being looted by oligarchs supported by the West, and plunged into a financial black hole.

The collective West deliberately chose not to finance the black hole. Most of the IMF injections were simply stolen by the oligarchs, and the loot transferred out of the country. These oligarchic looters were of course “protected” by the usual suspects.

It’s always crucial to remember that between 1991 and 1999 the equivalent of the present entire household wealth of Russia was stolen and transferred overseas, mostly to London. Now the same usual suspects are trying to ruin Russia with sanctions, as “new Hitler” Putin stopped the looting.

The difference is that the plan of using Ukraine as just a pawn in their game is not working.

On the ground, what has been going on so far are mostly skirmishes, and a few real battles. But with Moscow massing fresh troops for a winter offensive, the Ukrainian Army may end up completely routed.

Meanwhile, as if the energy-suicide EU did not have to face a pyramid of ordeals, they can surely expect to have knocking on their door at least 15 million desperate Ukrainians escaping from villages and cities with zero electrical power. 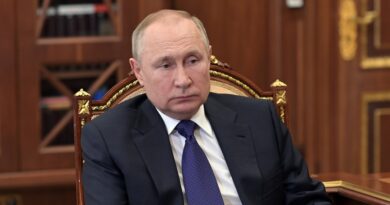 Lior Gantz – The Old Economic World Is Coming To An End, A New Economy Will Take It’s Place