We are now hurtling towards the final revolution in which humanity will not be forced at gunpoint into slavery but presented with a series of complicated fraudulent contracts and asked to sign blindly on the dotted line. The oligarchy would like nothing better for you to passively accept your slavery; to ask for it even.

Let’s not lose touch…Your Government and Big Tech are actively trying to censor the information reported by The Exposé to serve their own needs. Subscribe now to make sure you receive the latest uncensored news in your inbox…

The global technocratic mafia recently met at a G20 summit in Bali and made a commitment to prevent people from moving freely unless they have been injected with medical preparations they may not want or need. It’s bizarre, to say the least, that a stupendous public health policy failure should convince the governments of the world’s largest nations to make their citizens’ ability to visit friends, family or go on holiday conditional on their acceptance of provably dangerous medication.

I want to make it clear from the start that even if the word “failure” in the title of this piece had been replaced with “success,” arguing for vaccine passports would still be an obtuse assault on human rights and dignity.

A vaccine is purported to work because it allegedly does something inside the body of the recipient to prevent transmission and infection. Whether the vaccine is effective or not, a vaccine certificate does nothing to change public health outcomes related to infection and illness. The only thing it achieves is discrimination against those who still believe that they have the right to reject medical treatment they don’t want.

Basking in the warm glow of Pfizer’s imaginary invincible “vaccine” force field may be a psychological by-product of the injections, although many of the people still most afraid of covid are the ones who have been “vaccinated.” Dancing on the graves of those who chose not to “feel the force” may well be another by-product of the injections, although the evidence is mounting that the graves are disproportionately filling up with the vaccinated. But stretching out your arm to proudly display a phone screen lit up with a “vaccine” passport is the 21st century equivalent of a Sieg Heil salute. In the wake of arguably the most colossal medical scientific failure in history – the rollout to billions of humans of “vaccines” that not only failed to stop infection or transmission of the targeted pathogen, but made infection more likely, and which are causing horrific injury – the global technocratic mafia is taking steps to both coerce the take-up of the medical preparations at the centre of this failure and to train the public to accept digital surveillance.

The news of the G20 little Hitlers’ determination to impose biomedical fascism with a Show-Your-Papers regime is disappointing but unsurprising. Their determination to institute action that flies in the face of this medical failure seems, on the face of it, bizarre. Confronting this apparent contradiction helps us understand the reasons underlying it and therefore the bigger picture unfolding.

Incidentally, the G20 announcement vindicates my scepticism, and that of many others, about the Government’s claims to have shelved development of covid passes while continuing to resource covid pass projects. Bare-faced lying has become par for the course – an essential tool in normalising the abnormal in order to turn democracies into dictatorships in the space of a few short years without the aid of heavy artillery.

The global scale of the mass medical experimentation to which humanity was subjected would have made Josef Mengele’s jaw drop in envy. The drive to shove a needle into the arm of every living human being on the planet is a disaster unparalleled in modern medical history. The question I want to address in this essay is: what makes the brass-necked G20 fascists so confident that their licence to kill, which they granted themselves in March 2020, will not soon expire? I’ll try to answer the question within the following framework:

I’ve used the word “fascist” or “fascism” four times already (six if you count this sentence). The Covidian Cult, whose arms twitch in excitement at the prospect of performing the Sieg Heil QR code salute at airports, and wherever else they can, will no doubt object to my seemingly liberal and hyperbolic use of the ‘f’ word. So, I will argue that I am not overstating the case. Fascism has in fact been a long time coming, and perhaps the Covidian New Normies are the smart ones – maybe they’ve always known we were living in a third-rate democracy simulation, and March 2020 simply opened the door for them to experience a more authentic life, living in true alignment with their hitherto suppressed values. But I digress. Let’s return to capitalism as organised crime and capitalism in crisis, aka fascism.

The above is the introduction to Rusere Shoniwa’s essay.  Read his full essay published on Holding the Line: Journalists Against Censorship HERE 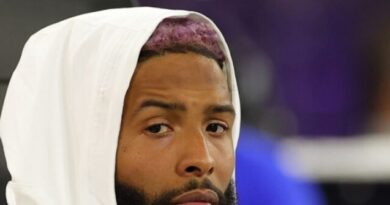 Odell Beckham Jr. Tossed Off Plane in Miami, ‘In and Out of Consciousness’