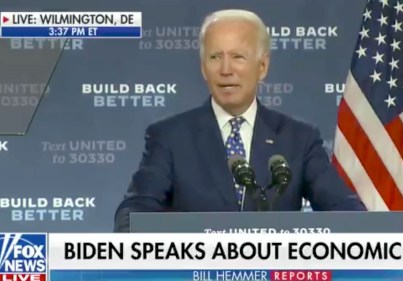 Joe Biden got tongue-tied while reading a teleprompter on Tuesday, saying, “We can’t rebuild our economy and meet this crimate clisis. [sic]” Watch: AG Barr hearing takes a 5 minute break and Fox dips into the Biden event: Joe Biden: “Crimate Clisis” pic.twitter.com/CDcx76JFpw — Benny (@bennyjohnson) July 28, 2020 After Biden first approached the podium, he attempted a joke, which promptly fell flat. WATCH: Joe Biden welcomes people to the wrong community center, then claims he was joking. pic.twitter.com/LSh164H7YJ — Trump War Room – Text TRUMP to 88022 (@TrumpWarRoom) July 28, 2020 “Good afternoon everyone,” he said. “Welcome to Kingswood Community Center,” he continued, before standing for several moments, mouth agape. “Actually, that’s the one down where I used to work. That was a joke,” Biden said. No one could be heard laughing. Another time, a reporter was forced to correct the candidate when he misstated the city that was to host the Republican National Convention. Biden said it would be in Tallahassee, and a journalist responded, “Jacksonville?” In Joe Biden’s world the RNC was going to be held in Tallahassee. #Qanon #WWG1WGA pic.twitter.com/krEvcGEzFQ — Robert Young (@carolinabama) July 28, 2020