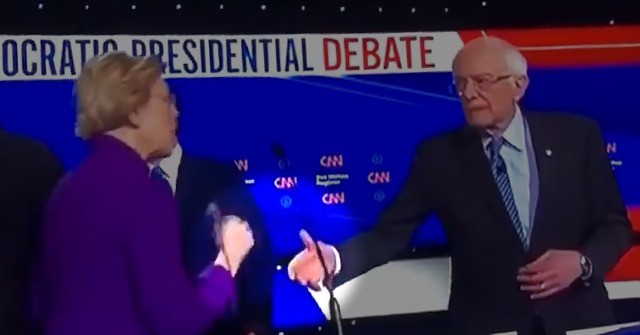 Sen. Elizabeth Warren (D-MA) would not shake Sen. Bernie Sanders’s (I-VT) hand after accusing him of once asserting that a woman cannot win the presidency after Tuesday evening’s Democrat debate in Des Moines, Iowa.

Sanders is seen extending his hand to Warren, who instead moved her hand away and began talking to her White House rival in a tense manner. The pair exchange a few words before a perturbed-looking Sanders turned his back to Warren and walked away. Immediately after, Sanders is greeted by billionaire and climate change activist Tom Steyer and the two shake hands.

“Well, as a matter of fact, I didn’t say it, and I don’t want to waste a whole lot of time on this because this is what Donald Trump…would want,” Sanders responded when asked why he made the remark during a 2018 meeting with Warren. When it came time to Warren being asked for her thoughts on the alleged incident, the Massachusetts Democrat said she “disagreed,” before adding: “Bernie is my friend and I’m not here to fight with Bernie.”

On Monday, CNN, citing anonymous sources, reported that Sanders told Warren at her Washington apartment in December 2018 that a woman cannot win a general election contest against President Donald Trump in 2020.

The Vermont lawmaker vehemently denied making the remark in a statement to CNN.

“It is ludicrous to believe that at the same meeting where Elizabeth Warren told me she was going to run for president, I would tell her that a woman couldn’t win,” he said. “It’s sad that, three weeks before the Iowa caucus and a year after that private conversation, staff who weren’t in the room are lying about what happened. What I did say that night was that Donald Trump is a sexist, a racist, and a liar who would weaponize whatever he could. Do I believe a woman can win in 2020? Of course! After all, Hillary Clinton beat Donald Trump by 3 million votes in 2016.”

Following Sanders’s denial, Warren issued a statement in which she claimed the Vermont senator indeed uttered the remark.

“Among the topics that came up was what would happen if Democrats nominated a female candidate. I thought a woman could win; he disagreed,” Warren recalled.

Nanny state insanity: New Hampshire bill to CRIMINALIZE letting your own dog run around your back yard when the weather is cold… dogs LOVE that!